Pedals de Foc Non Stop is the hardest MTB Ultramarathon in Europe and the first of Spain. It began in 2006 and each time has more participants. It uses as a base the track of the cyclotourist route by stages Pedals de Foc, with departure and arrival in Vielha (Lleida), a route that above all stands out for the extraordinary natural beauty and landscapes.

The physical requirement of the Non Stop version is maximum, with 213 km and 6,200 meters of accumulated positive slope, in a route that runs along the perimeter of the National Park of Aigüestortes and Estany de Sant Maurici, in the heart of the Catalan Pyrenees. It is a big personal challenge for any biker, whatever their level is

In the 2016 season the Open de España was organized again and Pedals de Foc Non Stop was the venue of Spanish Championships again, with 800 cyclists, historical record of the race.

In 2017 another step was taken, achieving the official recognition of the ultramarathon distance by the UEC and UCI, and the CC Pedales del Mundo was awarded with the organization of the first European MTB Ultramarathon Championship, which was held in the mythical Pedals de Foc Non Stop on July 1, 2017. In 2018 this happened again, with 967 bikers registered in the race, and in 2019 when we had 1000 cyclists in the race!

In 2020, the event should once again host the MTB Ultramarathon European Chmpionships, in a very special event as it is the 15th anniversary. However, the health crisis caused by Covid19 has led the organization to cancel the event.

In 2021, we organized our 15º edition and for fourth time an European MTB Ultramarathon Championship,  with 728 bikers registered in the race!

After being two consecutive years the Spanish Championship of the specialty, the Pedals de Foc Non Stop was the of the European MTB Ultramarathon Championship in 2017, 2018, 2019 and 2021. 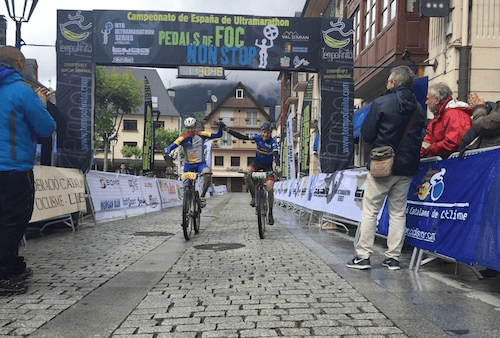